Devour the Land: War and American Landscape Photography since 1970
Harvard Art Museums, Special Exhibitions Gallery
Cambridge, Massachusetts
September 17, 2021–January 16, 2022
Devour the Land shines a light on the unexpected and often hidden consequences of militarism on habitats and well-being in the United States. Featuring approximately 160 photographs across 6 thematic groupings, the exhibition reveals the nationwide footprint of the U.S. military, the wide network of industries that support and supply its work, and the impacts of—and responses to—this activity.
How do photographs portray environmental damage that can be difficult to see, much less identify and measure? By posing such questions, the exhibition provides visitors a space to consider our current challenges and shared future. At the same time, the works on view also suggest how preparations for war and the aftermath can sometimes lead to surprising instances of ecological regeneration and change.
Following a trajectory that originates in the Civil War era, Devour the Land begins with the 1970s, a dynamic period for both environmental activism and photography. From there, the focus expands to our contemporary moment.
The 60 artists showcased in the exhibition bring a variety of practices and approaches to their work. They range from professional photographic artists and photojournalists to lesser known and emerging photographers; they include Robert Adams, Federica Armstrong, Robert Del Tredici, Joshua Dudley Greer, Terry Evans, Lucas Foglia, Andrew Freeman, Sharon Gilbert, Ashley Gilbertson, Peter Goin, David T. Hanson, Zig Jackson, Stacy Kranitz, Dorothy Marder, Susan Meiselas, Richard Misrach, Barbara Norfleet, Mark Power, Sheila Pree Bright, Jeff Rich, Sim Chi Yin, Sharon Stewart, Robert Toedter, Phil Underdown, and Will Wilson.
Organized by the Harvard Art Museums. Curated by Makeda Best, Richard L. Menschel Curator of Photography, Harvard Art Museums.

Golden Hour: California Photography from LACMA
Lancaster Museum of Art and History, Lancaster, California, January 23 – May 9, 2021
Riverside Art Museum, Riverside, California, June 5 – September 26, 2021
Vincent Price Art Museum at LACity College, Manterey Park, California, October 16, 2021 – February 5, 2022
Art Gallery at Cal State Northridge, Northridge, California, February 19 – April 30, 20222
In Golden Hour, over 70 artists and three photography collectives offer an aesthetic approach to understanding the complexities and histories of California. These images, gathered from the collection of the Los Angeles County Museum of Art, have come to define the myths, iconographies, and realities of this unique state. Pairing masters of photography with experimental practitioners in a range of lens-based media that includes photo sculpture, vernacular, and video work, the selection blurs the boundaries of the tropes that formed a California identity.
With works ranging from the early 1900s to present day, Golden Hour is neither a didactic history of the state nor an inclusive tale of photographic history, but rather artists’ impressions of the state of being in, and being influenced by, California.
This exhibition was organized by the Los Angeles County Museum of Art in collaboration with the Lancaster Museum of Art and History; Riverside Art Museum; Vincent Price Art Museum at East Los Angeles College; and California State University, Northridge, Art Galleries. 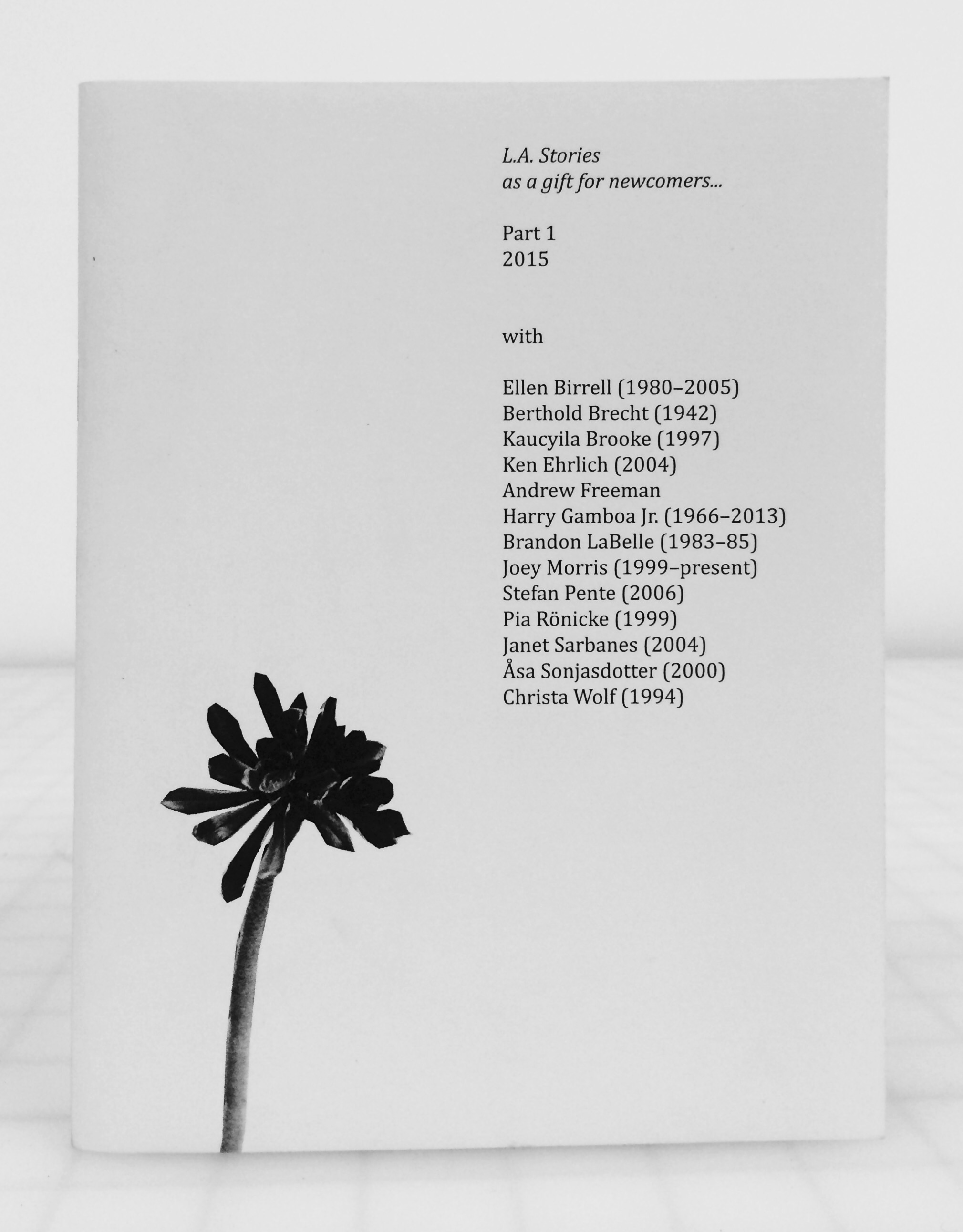 L.A. Stories
as a gift for newcomers
Part 1 / 2015
Shown at Lokale, Copenhagen.
Organized by Joanne Logstrup and Pia Ronicke.
Book by Ines Schaber

Book Release
Las Cienegas: 06.18.2009 – 12.17.2011
Rosamund Felsen Gallery
Los Angeles, CA
October 11, 2015
A cloth-bound, hard cover book documenting the history of Las Cienegas Projects, an artist-run project space in Los Angeles operating between 2009-2011. Opening its doors during the peak of the Great Recession, Las Cienegas Projects singularly bridged the wide-ranging art communities and diverse practices of Los Angeles, serving, in the words of artist, scholar, and educator Charles Gaines, as “an alternative to the alternative space”.
Designed by Jennifer Rider in conjunction with LCP’s founders Amy Thoner and Steven Hull, the 416 page book serves as an archive of the gallery’s 61 exhibitions from its main curatorial program, including extensive photographic documentation in full color and the original press release texts. Opening the book is an introduction by Los Angeles-based writer Susan Morgan, followed by the Charles Gaines essay, “Las Cienegas Projects: Art, Egalitarianism, and the Well-being of Artists,” which critically examines the history of alternative spaces while contextualizing LCP’s unique place within that history.

SOMETHING LIKE HOME MOVIES
Echo Park Film Center
November 9, 2014
Three Los Angeles based artists premiere new and in-progress works exploring similar themes that are reminiscent of home movies. Lee Anne Schmitt works in film, writing, photography, and performance to create work that elevates the everyday elements of American life towards the level of cultural ritual. Andrew Freeman is a photographer, writer, filmmaker and occasional curator. He has exhibited both nationally and internationally. Nick Flessa is a filmmaker, musician and visual artist. All three will show new works and will be in attendance for discussion.

“Not North,” Essay by Andrew Freeman
Published in EXPOSURE,  journal produced by the Society for Photographic Education
Fall 2014 Issue 47:2
read here: Not North

Construction / Deconstruction: Defining Architectural Photography
Los Angeles County Museum of Art
May 4, 2013–August 18, 2013
In the 19th century, the built environment served as one of the best subjects for early photographers—one that could remain motionless for the required lengthy exposures. Architecture as a recurring subject was well-suited to the capacity of photography to document facts and capture pure form, shape, and shadow. In addition, architectural imagery highlights the intimate human experience of buildings—their creation, use, and decline—making manifest our shared histories and the photographic pathos of a still life meant to stand beyond our lifetime.
Coinciding with Modern Architecture in L.A., a city-wide exhibition program organized by the J. Paul Getty Museum, this exhibition turns our focus to architecture in transition, in either the nascent stages of construction or deconstruction. Structures once viewed as solid and impassive read here as more abstract entities, with layers and complexities writ by photography. The exhibition includes work by Thomas J. Annan, Eugène Atget, Lewis Baltz, Richard Barnes, Manuel Carrillo, Lois Conner, Stéphane Couturier,  William Current, Andrew Freeman, Simryn Gill, Grant Mudford, Simon Norfolk, and James Welling.

In Our Sights
Machine Project, Los Angeles, CA
October 5, 2012
Conversations and Performances by:
Andrew Freeman
Gabie Strong
Nathan Lam Vuong
Mireya Lucio
Arjuna Neuman
& TED Talks
In Our Sights is an experiment in pushing the documentary form into a more personal and intimate space. While the document and the archive is still important, as is the research that underpins the re-telling of any story, the delivery of this information will be questionably unmediated. Or, at least, less mediated than in a traditional documentary film.
In Our Sights borrows from the oral tradition, and invites the audience into an installation where artists will perform memories and engage with you in conversations. So that you become as much a part of the re-telling of this story as the story itself.
The future starts in Wendover, Utah. It was here that the bombardiers trained to drop the atomic bombs on Japan. This training facility was also training the world to see and experience differently, it prepared us without us knowing, for a new subjectivity. The immaculate conception of the nuclear bomb, with its Trinity test and press conferences in Japan, ushered in the era of the radioactive sublime. Soon we would all become disciples of technology as an ideology, a theology and the only thing left to believe in.
For In Our Sights Machine Project will be converted into a version of the Wendover bombardier training facility, where bombsights will be cut into the floor to view slide-projected images in the basement below. Inside of this environment Andrew Freeman and Gabie Strong will field conversations and re-tell stories about the contradictions inherent to the armed forces as the last national socialized collective. For example Andy writes:
“In the most simple, persistent conflicted conversation I have with myself I wonder why I can still pick out the sound of a military aircraft and simultaneously think “death from above” and there goes my (a) father.”
Downstairs in the target range Mireya Lucio and Nathan Lam Vuong will each conduct one-on-one performances that weave together personal memories, fragments and stories key to their identity formation inside and against the larger forces of history, ideology and technology.

Book Presentation and Panel Discussion on Mario Pfeifer’s “Reconsidering”
LAXART, Los Angeles, CA
April 10, 2011
Panelists: Allan Sekula, Catherine Taft, Mario Pfeifer
Moderator: Andrew Freeman
LA><ART is proud to host Mario Pfeifer: Reconsidering The new Industrial Parks near Irvine, California by Lewis Baltz, 1974. In a panel discussion – for the book’s  first presentation in the US – speakers Allan Sekula, Catherine Taft and Mario Pfeifer will discuss possible answers to the inherent questions and furthermore investigate notions of Representation / Reproduction / Realism in these works, paired with critical observations of labor depiction within socio-political and conceptual art practices in the 1970’s until today. Andrew Freeman will be moderating the discussion.